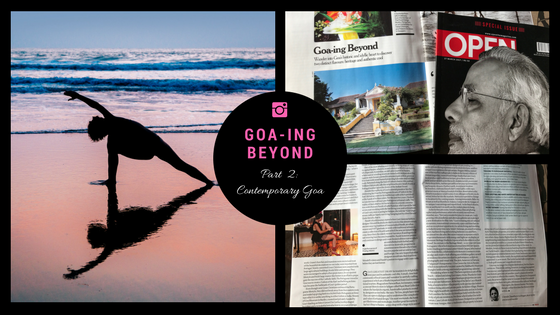 This article was originally published in the Intelligent Traveler section of Open Magazine. Authored by me, it’s re-published here with additional images & coordinates as a three-part series : Historic Goa, Contemporary Goa and a list of six unusual experiences which are meant for cool hunters.

Having explored Goa’s historic gems in Part 1 of Goa-ing Beyond series, lets wander into the idyllic heart of Goa’s unique & exceptional experiences.

Until a few decades ago, Goa’s ‘cool’ was synonymous with the hippie-era and liberal counter-culture. In recent years, however, a small, close-knit community of local Goans and ‘outsiders’ are carefully crafting experiences which are a blissful departure from it’s conventional and stereotypical tourism. This community is infact, creating yet another counter-culture – but one which is deeply rooted in sustainable design, re-contextualising heritage crafts, architecture and ideas for a modern consumer.

Bhagyashree Patwardhan, for instance, owns & curates a concept lifestyle store in Saligao called Paper Boat Collective where she handpicks organic, handcrafted products created by designers across India. She says, “In Goa, people have time. They are open to dialogue and to understand the complexity and value of artisanal design”. On most weekends she hosts art-filled events and workshops at her store & restaurant.

Another great favourite is Sacha’s Shop in Panjim – a tiny shop with a huge style and art quotient. Curated by writer and fashion stylist Sacha Mendes, it hosts edgy resort wear with laid-back elegance, including a collection of Goa’s very own cult designer SavioJon, and quirky collectibles such as leather puppets, cross stitch towels and a recent addition of delightful vintage lace doilies.

Further north, in a remote location in Arambol celebrated Israeli chef Gome Galily cooks up a gourmet storm at Matsya Freestyle Kitchen. Reservation, a day ahead, is mandatory to tell Gome of any allergies or foods you do not eat. Then leave it to him to hit the local markets to find fresh produce and cook whatever inspires him that evening which is then served in an elegant fine-dining setting.

Note : Matsya is currently closed and will change its location for the upcoming season.

Among restaurants, Baba Au Rhum as well as Shamba in Anjuna, Gunpowder in Assagao offer unique Goan setting and superb food. As for beach shacks, Elevar and Baxter’s in North are the most recent and coolest places to hang.

Fine Arts (and artists) find a new home in Goa

While Delhi is obsessed with success and Mumbai just extortionate, Goa’s winning mix of cultural dynamism, transnational community, space and time has created an exceptional opportunity for artists living and working in India for some time now.

Yahel Chirinian, an award winning artist, has been living between Goa and Paris for over two decades. Considered a muse of pop-art, her mirror mosaic sculptures and installations erupt simultaneously with energy and light and are on display at Monsoon Heritage Studio in Arpora which she refers to as her island.

In recent years, however, a new surge of activity has begun. As Shivani Gupta, a fine-art photographer and performance artist says “Not just a wonderful place to create art, Goa’s growing critical audience and alternate galleries is making it a new destination for Fine Arts”.

One such fantastic space is The Heritage Hotel – a 100-year old Goan Portuguese villa which was transformed into HH Art Spaces. India’s leading performance artist Nikhil Chopra who moved from Berlin, collaborated with Romain Loustau to create an edgy and creative hub offering an exhibition gallery as well as residence for artists involved in performance, sculpture, photographic and visual Arts.

The pick, however, is Dattaraj V. Salgaocar’s Sunaparanta housed in a beautiful old Portuguese home hidden behind banana and coconut trees on a winding road to Altinho Hills in Panjim. Exceptionally curated by Siddharth Dhavant Sanghvi, an award winning novelist, who recently moved to Goa this professionally run center has a strong programming calendar throughout the year. Sunaparanta was also recently nominated for Forbes Art Awards in the Not-For-Profit Art Initiative category.

Where to Stay in Contemporary Goa?

As to where to stay, the best experiences are off the beach — inland and along Goa’s many rivers. Thanks to Goa’s booming tourism, several great boutique properties are now run as private hideaways. At the top of the list is Coco Shambala – a short walk from Coco beach this luxurious four villa property is a haven for design-lovers & discerning travelers. Thoughtfully appointed with spectacular indoor / outdoor living areas, private pools, be-spoke dining and a Forest Essentials’ Ayurvedic Spa located in the thick of their jungle gardens, there is nothing left for wanting at this property.

In Siolim village, Shunya Villas’ eight beautifully appointed bedrooms and an in-house chef combine the luxury of a boutique hotel with the exclusivity of private residences. For those who’d rather live with nature, Casa Colvale ticks all the boxes. Designed as a private estate, near Assagao, this 12-bedroom villa property is located along one of Goa’s cleanest and most beautiful rivers – Chapora.

As for beachside properties, it is rather unfortunate that Goa’s 100+ kilometre beach is now crowded especially during peak season when cheap charter flights from the West and trucks from neighbouring states deposit hordes of tourists on its coastline. An exception would be a 13-room secluded hotel, Elsewhere, at a secret location which happens to be a protected island at the northern edge of the state. In Morjim, Amarya’s Paros is an enchanting beachfront hideaway on Turtle beach — one of India’s best glamping sites with eight stylish guest accommodations. There is also a three-bedroom, beautifully restored Portuguese villa for those who prefer a brick & mortar roof over their head. In the South, the sophisticated and beautifully appointed 75-acre resort, The Leela Goa includes a super spa, 12-hole golf course and  magnificent views.

Goa may no longer be a hippie destination but its charm carries on. This idyllic setting, however, is struggling against bureaucracy and haphazard urbanisation which is turning this historic gem into yet another poorly planned town as we’ve seen so often in the country. Throughout its chequered past, the powers that be came to Goa and abused its natural resources for their own gain, oblivious of its cultural heritage. Once again the demon looms. The irony though, is that this time the threat is from within.

While every recommendation in this article / series tick all the boxes for a discerning traveler, here is curating the ‘already curated’ for those who are obsessed with design and love boutique experiences.

Next in Series, Part 3 : An ultimate insider’s guide to Goa’s unusual  experiences

6 thoughts on “Goa-ing beyond, part 2 : A discerning traveller’s ultimate guide to contemporary Goa”